Home > Campaigns for Reparations Are Gaining Steam Across the Country

Campaigns for Reparations Are Gaining Steam Across the Country

Marvin Roger Anderson, now eighty-one years old, grew up in a development his father and three other railroad employees built in 1946. As a child, he painted and cleaned his neighbors’ townhomes when they moved out, planning to someday manage the property with his father.

The twelve buildings his family owned in the Rondo neighborhood of St. Paul, Minnesota, home to more than 80 percent of the city’s Black residents, were a waystation for those setting roots in the area—everyone from social workers and chefs to one of the U.S. Air Force’s first Black test pilots and a professional baseball player.

“Now is the time to start something locally,” Robinson says. “Whatever we’re able to do, even if it’s not the federal program we deserve after 400 years of disinvestment and harm on the Black body.”

In the late 1950s, Minnesota determined to put an interstate highway through the heart of Rondo. According to Anderson’s research, city planners selected the route because they could buy the land inexpensively and pocket the excess federal dollars. In 1958, after months of negotiating with the state, the townhomes were sold for 40 percent of what his family and the other  investors put in. Anderson’s father never developed property again.

The state highway department cited the structures’ “inferior construction” in justifying the final offer. A decade after that, making way for the highway, the townhomes were dismantled with industrial saws and trucked to new sites across the city, where sixty-three years later many still stand.

Marvin Anderson reflects at a “healing ceremony” at the site of where the Rondo Commemorative Plaza was later built.

On January 13, the city of St. Paul voted unanimously to examine reparations for Black residents, acknowledging its complicity in racial discrimination, including the dismantling of the state’s largest Black cultural, religious, and business hub. The vote was the latest effort by a string of cities around the country to study how they have failed Black residents—and what they can do to atone.

A groundswell that began in Evanston, Illinois, in 2019 with a “commitment to end structural racism and achieve racial equity” gathered momentum last year, with similar resolutions passing in Asheville, North Carolina; Providence, Rhode Island; Chicago, Illinois; and the state of California.

Now, as local governments look to turn ambition into action, disconnected groups of professionals—many frustrated by the glacial movement of the H.R. 40 bill to examine reparations that was first introduced into Congress more than thirty years ago—are channeling their expertise to help cities rise to meet the challenge.

“This is why I use my voice,” says Georgia Fort, an independent journalist in St. Paul who took up the cause. Teaming up with Trahern Crews, co-chair of the U.S. Green Party, who had already begun to campaign for a local resolution studying reparations, Fort produced a video last summer explaining the importance of the effort. She later joined the city’s community reparations steering committee to help engage stakeholders in the process.

Others around the country have leaned on skills in history and mapping technology to highlight the racial discrimination that government bodies have typically obscured—often in bubbly euphemisms like “beautification” and “urban renewal.”

Dino Robinson, founder of the Shorefront Legacy Center, began working with the city of Evanston two years ago. A longtime community archivist, he understood the city’s history of segregation—not only in redlining but also on its celebrated beaches, where it developed a program in the 1930s that used tokens to screen Black residents and prevent access. Robinson felt that taking part in the effort was a moral imperative.

A truck carrying gravel prepares the ground for I-94 on what was once Rondo Avenue, the heart of Minnesota’s largest Black neighborhood.

“I wanted to use my perspective as a historian to examine the questions people in the community were asking about what Evanston has done to harm Black people,” Robinson says. “It turns out, there are a lot of things that happened here that are in stark contrast with the image of diversity and inclusion that the city likes to trumpet.”

Evanston became the first U.S. municipality to fund its reparations initiative, voting last July to earmark $10 million from its new cannabis tax for the cause. Given the scale of segregation that occurred in the city, it took aim at housing for its first effort, launching a program last December where descendants of Black residents harmed by Evanston’s redlining will soon be able to apply for a $25,000 benefit.

In the city of Providence, which agreed to study reparations on Juneteenth 2020, Mayor Jorge Elorza hosts weekly ninety-minute meetings, centering the voices of residents of color, who bring varied expertise as well as their personal experiences to bear in sharing stories with a staff of nearly twenty city officials.

A view Eastward in the 1960s captures the months when the trees began to come down.

Mappers using sophisticated GIS software have also developed tools to chart the effects of racist policies, inspiring others to confront them. Mapping experts in Asheville’s department of equity and inclusion are not directly involved with its reparations effort; but they work with each team in the local government to help it use data to drive decision-making.

“If you can see inequity, it becomes easy to understand,” says Christen Watts, the city’s GIS manager. “That’s when a lightbulb can turn on, and you want to learn more.”

In Seattle, where the flagship newspaper called for reparations in January, mappers have developed equity indexes to examine the situation of residents on the level of the neighborhood and the street. As Nicole Franklin, the former chief equity officer for Seattle’s King County, explained in a presentation of her research, “undoing systemic racism is a spatial analysis.”

The programs in each city—and in California—remain in their infancy, vessels of potential and aspiration, but hindered by the current lack of federal funding. The quickening pace with which local governments are taking up the actions speaks to a growing movement that has given progressives a way to begin the journey promised 156 years ago with the Union’s pledge to give freed families forty acres and a mule. 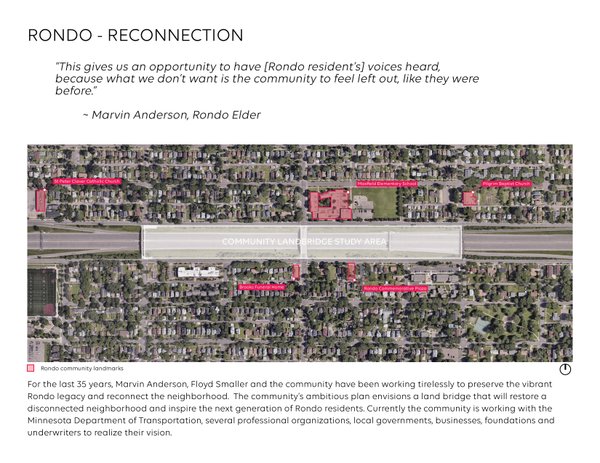 An aerial view of the highway to be covered by the land bridge that Reconnect Rondo proposes.

“Now is the time to start something locally,” Robinson says. “Whatever we’re able to do, even if it’s not the federal program we deserve after 400 years of disinvestment and harm on the Black body.”

If the scale of some ideas recently put forth to promote racial equity is any judge, the leaders that have pushed local governments to confront their racist histories are not willing to settle.

Sixty-three years after Minnesota displaced his family from Rondo, Anderson brought a proposal to the state’s department of transportation, which he also hopes the city of St. Paul will support: a four-block land bridge over the Interstate that would stitch the historically Black neighborhood back together.

As soon as he learned that St. Paul’s vote to form a reparations commission had succeeded, Anderson put in an application to join. “I’m waiting for their call,” he says.